Light, like all the basic constituents of our universe, seems to be made of waves. Waves that act a bit like particles, sometimes, but which spread out and interfere with each other just like other waves.

It’s about 200 years since physicists finally agreed that light behaves like a wave, after Poisson proved himself wrong with an ingenious experiment involving a surprising bright spot in the shadow of a disc. We could have come to that conclusion much sooner, if we had known what we were looking for, but nobody really thought about interference patterns very much in those days.

Francesco Maria Grimaldi coined the term ‘diffraction’ in the 1660s, to describe his observation that light spreads out when it passes through a small hole. If you put a piece of paper in the path of the light you see a bright disc surrounded by increasingly large and faint rings. It looks something like this (the outer rings are fainter in real life, though): Those dark rings are where the light waves coming from one part of the hole interfere destructively with those coming from the other side – the peaks of one meet the troughs of the other. The bright areas are where the peaks meet and combine. Grimaldi didn’t quite figure all of that out, although he did come to something like a wave theory of light.

Hooke and Huygens both worked on mathematical theories of light waves around that time too, but Newton published a theory of optics based on light consisting of particles (or ‘corpuscles’). It more or less worked, and given the towering nature of Newton’s scientific achievements, it isn’t surprising that people just sort of went along with that until the early 19th century, when it was conclusively disproved.

Once we realise that light is wavy, it becomes possible to explain quite a few observations which are otherwise a bit mysterious. Here are some of the things you might have noticed in your life, which are all inexplicable if you don’t know that light is made of waves which can interfere with each other. The colours that we see when oil floats on the surface of water come about because the film is thin enough, and close enough to a constant depth, that light reflected from the bottom interferes with light reflected from the top. Since different colours have different wavelengths, they interfere to different degrees depending on tiny variations in the thickness of the film, and the angle of the light. A related effect explains the iridescence of certain beetles and butterflies. Rainbows, and even double rainbows, can be explained by simple refraction – the light changing speed and direction as it passes through a medium, in this case water. That itself doesn’t prove that light isn’t a particle, but some rainbows have additional, narrower bands of colour inside the main bow – and those are entirely puzzling until you understand that they are caused by interference. The explanation is in the diffraction of light bouncing from fine raindrops, which creates a series of increasingly faint inner rings. The smaller the droplets, the bigger the spacing is between the rings, which is the general rule in all kinds of diffraction. This means that unless they are all much the same size, the effect gets smeared out with different rings overlapping, and we don’t see the supernumerary bows at all. When the moon shines through thin clouds, or a layer of fog, there is often a bright area around it, fringed by bands of colour. Again, this only happens when the droplets of the cloud are particularly consistent in size – if the size varies from one part of the cloud to another we get a patchwork of colours referred to as iridescent clouds. With sunlight these effects tend to happen where the light is too bright to make out the colours, while with the moon, the light is too faint for our colour vision to work at full capacity. The best way to see these beautiful effects in their full glory is to wear sunglasses, and look at the thin clouds around the sun while blocking the sun itself from your view. 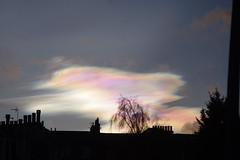 Far rarer than the corona and a good deal more spectacular, nacreous clouds are also the result of diffraction. The difference is that rather than droplets of liquid water, the light of nacreous clouds are diffracted through stratospheric ice crystals. Usually the stratosphere is too dry to form clouds at all, and not quite cold enough, but when it drops below about 85°C, and especially when moist air is lifted up from the troposphere by gales down below, great wave-shaped clouds of fine ice crystals can form, with amazing colours that are often at their most vivid just before dawn and just after dusk. Speaking of glory, if you ever get to look down at your shadow (or your aeroplane’s shadow) in mist or clouds of the right consistency, you will see something called a glory, which looks very much like a corona surrounding your shadow in the mist. Your shadow, meanwhile, is likely to take on an eerie shape known as Brocken’s spectre.

When net curtains, or umbrellas, are made with sufficiently thin and uniform fabric, it is quite common to see diffraction fringes around light sources. The shape of these is characteristic of a square diffraction grating, and closely analogous to some of the patterns seen in x-ray crystallography. If you get the chance to look through a drop of water at an unfocused point of light somewhere behind it – through a window or a pair of glasses, for example – you are likely to see a caustic projected on the back of your eyeball. Around the edges and cusps, where the light is bent back on itself, we can sometimes see quite rich and occasionally colourful interference fringes.

A different but related effect is sometimes seen through a fine mist of water on a glass pane, or an eye that is covered with the right kind of gunk. There is a hazy ring around light sources, and then the darker and lighter fringes that are characteristic of diffraction. Occasionally the same effect can be seen in a dusty mirror.

When we look at a bright, featureless area, it is common to see what look like translucent objects floating across our fields of vision. These are the shadows of loose cells and other tiny pieces of debris passing close to our retinas, and they are often on the right scale to show noticeable diffraction fringes around their edges.

Once you know what to look out for, the wave nature of light is easy to see. All these little oddities in the behaviour of light make perfect sense when you know that light – just like water waves and sound waves – bends when it passes from one medium to another, spreads out around barriers, and shows areas of greater and lesser intensity where waves reinforce or cancel each other out.

One thought on “The Everyday Signs of Light Waves”