On Friday the 20th of March 2015, the moon’s shadow passed over a stretch of the northern half of planet Earth from Greenland and north Africa to Mongolia. I was in its penumbra, where it didn’t quite block all of the light from the sun. Its umbra, where it eclipsed the sun entirely, passed a few hundred miles to the north, bringing a couple of minutes of day-time night to a long strip of open sea, and the northern archipelagoes of Svalbard and the Faroe Islands. 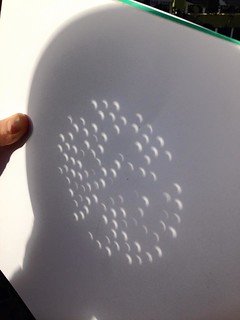 Much of Britain was covered by such thick cloud that it was impossible to really see what was going on, but we had perfect eclipse weather in Edinburgh – patchy clouds and high winds, so that there were times when the cloud cover was thick enough to look directly at the sun (though good health & safety practice recommends against it), and other times when there was enough direct sunlight to get really clear crescent shapes where there were breaks in shadows. We tried making a pinhole in cardboard, but got better results by just holding up a colander. You need to hold it far enough away that you’re viewing mostly penumbra; the effect is the same one exploited by pinhole photography. 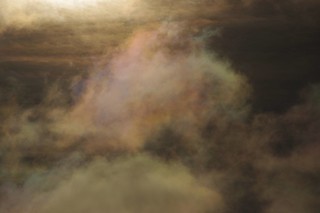 We were close enough to the zone of totality that only a tiny sliver of sun remained at the maximum point of the eclipse, around 9:30 in the morning, making it about as dark as twilight – ideal for appreciating another thing that made the weather perfect. For a few minutes we had just the right kind of clouds to produce iridescent effects – thin clouds with evenly sized droplets, allowing diffraction patterns to be strongly visible. Iridescent clouds and coronas actually occur very often, but  in the daytime they’re usually too bright to be seen, while at night it’s too dark for us to fully appreciate their colours. 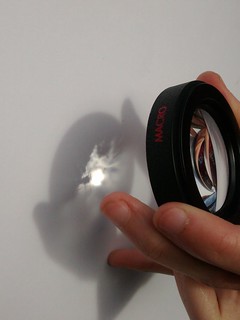 Another technique for looking at the sun indirectly is to use lenses to project an image onto a flat white surface. We tried using a macro lens-extender I normally use to take extreme macros. It projected a pleasingly clear image of the sky and its clouds, but the image of the sun was too small to be much use. We should really have used more than one lens – one to focus, one to magnify. A friend in London, also a science teacher, took the opportunity to make a projecting telescope. He reports: ‘Shame it was cloudy but under a hood you could get a clear image of buildings miles away. Kids loved it, the hood added mystery.’ Another teacher at my school had a proper heavy-duty astronomical telescope set up to project an image of the sun about 10cm across, and 80 or so solar viewers with special film that one of the younger classes had fashioned into flimsy but effective glasses. 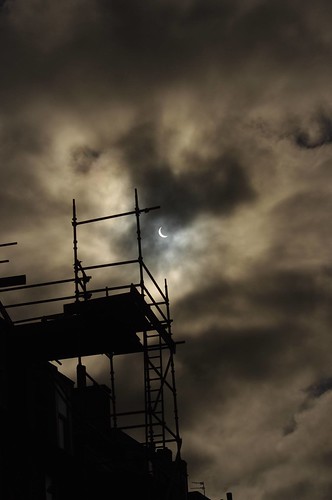 There are a few more of the pictures I took in our garden in this album. If you missed this one, the next total eclipse visible in Europe will be on the 12th of August, 2026, in northern Spain.