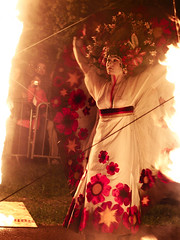 I crouch below the eyeline of the crowd
Half-watching  Water dance, half  in-camera.
The drumming and the wash-rags beating loud
I strive to  trap in electronic  amber. 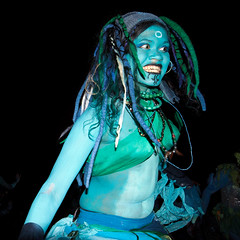 With flashes or by squatting frozen-still
I  take away the movement of the night.
This festival of  Nowness on the hill
Distilled in  slices,  slides for  future sight.

The energy of life in human form
Is tumbling before me, painted red.
The  spirit of the forest is reborn!
I’m turning dials and living in my head.
The bonfire smokes the wastage of last year
And sparks a blaze in me – and now –  I’m here. 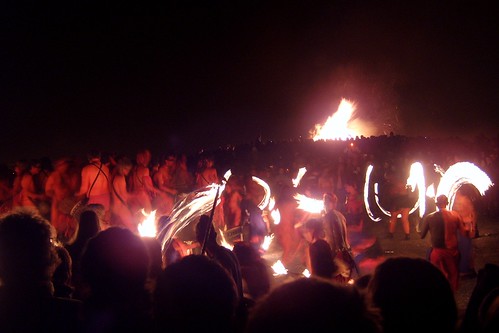 I wouldn’t want you to think I didn’t enjoy being part of Photopoint, the group of official photographers at Edinburgh’s Beltane Fire Festival*. It’s just that I’ve always had an ambivalent relationship with photography – much as I love it, I’ve never been completely at ease with the distance it puts between me and whatever is going on. Added to that, I’d taken part as a performer in the festival for the last three years, making that distance feel particularly odd.

On the other hand, it was wonderful to have such a good view of so much of what went on, and when you might want to be involved in something in the future, there is a lot to be said for spending some time watching it critically, as a spectacle, and recording what you see. All in all, it was a great experience for me – both the night itself and the preparation, spending a lot of time with an excellent bunch of people who are also good photographers.

*Started in 2007 by Stuart ‘Two Truths’ Barrett, the group is named by analogy with the various points representing elements and so on at the festival – Water Point, Fire Point, No Point and so on.